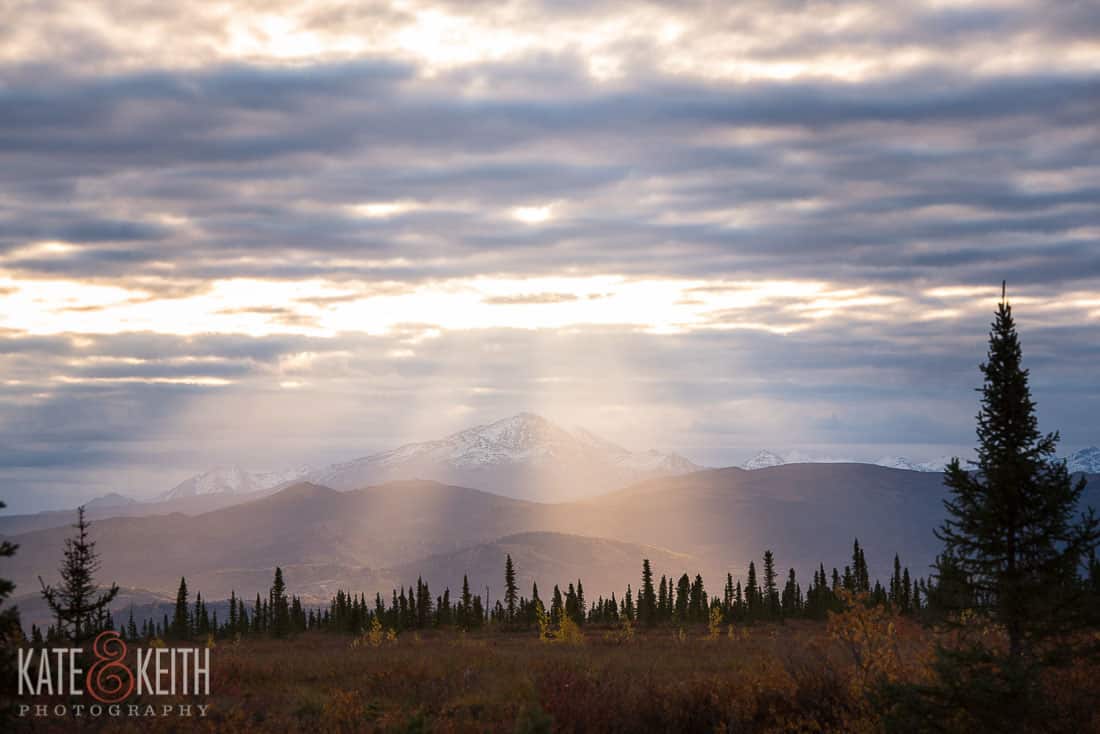 You may notice that Kate is the one that usually does the writing around here, it’s not because I’m bad at it, it’s just because she is that good at it. Our Wedding Photographers in Alaska Adventure was such an amazing experience for me that I wanted to take the reigns on writing this post. So without any more delay, get ready to immerse yourself in an incredible adventure filled with breath taking vistas, up close wildlife, and a whole lot of coffee!

We landed in Anchorage in the evening, the same day that President Obama landed for his visit to Alaska, the first official visit to the state by a sitting President. We saw his motorcade that night on our way to dinner, and though that would be the last time we actually saw him, we ended up following his tour around the state about a day behind him.

When we got to the car rental counter we made the decision to upgrade our vehicle to an SUV, shifting our plan from finding places to sleep along the journey, to sleeping in the car. We’re no strangers to sleeping in the car on adventures and highly recommend it, and in this instance it proved to be the right decision for us. We stopped by REI, grabbed some supplies, and began our exploration of The Last Frontier by sleeping in a Walmart parking lot.

Our friend Anne, a fellow wedding photographer and world adventurer connected us with the owner of The Hoarding Marmot, a great second-hand outdoor adventure supply, and a ton of info to get us on our way to Homer, AK. with a hike along the way. Our first hike was up Mount Alyeska a part of the Chugach mountain range, and home of the largest ski resort in Alaska. Apparently grizzly bears are not the only thing hikers need to worry about in Alaska, thankfully we did not happen upon any unexploded artillery shells.

Our time in Homer was relatively brief, we enjoyed our first of many incredible Alaskan seafood dinners with a wonderful couple that splits their time between Alaska and Maine, took in arguably the best sunset of the trip, and spent the night on the Homer spit.

Off to Seward where we just missed bumping in to the President, as we overheard the locals at the Sea Bean talking about Obama’s visit we followed along on Pete Souza’s Instagram feed. Our boat tour of Kenai Fjords National Park was filled with wildlife. Orca, Humpback, sea otter, baby seals, bald eagles, and several unique birds made for constant viewing opportunities on our way to the glaciers.

Have a look at the photo above, that is a very large tour boat scaled next to the Holgate Glacier. Being near the glaciers, seeing the size, hearing the calving, was a pretty incredible experience. While in Seward we also visited the Exit Glacier, the same one Bear Grylis explored just a couple days before.

From Seward we made our way back to Anchorage where we spent the evening at the home of some new friends and got an early start by flying, yes actually flying an airplane out of Anchorage, around Hope and back over the Turnagain Arm. More on that later.

Now, on to Denali National Park!! The first thing we saw on our way out of Anchorage were two guys, one from Belgium the other from Wyoming looking to make their way to Denali as well so we pulled over and had them join us for the the four hour ride and a pizza dinner once we arrived. It was exciting to hear about their unique journeys that brought them to Alaska, how they got paired up at a hostel in Anchorage, and their plans for back country camping in Denali.

After parting ways with our travel companions,  we secured our campsite then drove up the road into the park, hoping for a walk for some exercise prior to turning in for the night. Less than a mile along we came across these two huge bull moose having an evening road-side snack while being gawked upon by about fifty shutter happy tourists.

While in Denali your only options for getting deep into the park are, tour busses, back country camping, hard to reserve cottages, or special circumstances permits. We opted for an 8 hour bus tour that includes several stops, and if you’re lucky, a view of Denali (Mt. McKinley had we come a few weeks earlier.) The bus tour was guided by a very knowledgeable super nice guy who doubled as a ski instructor in Colorado during the winters. The passengers were provided with instructions on how to get the bus to stop when wildlife was spotted, and now you know how it becomes an 8 hour bus tour rather than 4 hours. I do have to thank the many eagle-eyed passengers that accompanied us on our tour, if not for them we probably would not have seen any bear on our visit to Alaska. All of the spottings were of tiny well camouflaged brown specs that I kept mistaking as bushes or tufts of grass. The bear photo above was shot with a 200mm lens and heavily cropped, and that’s about as close as we got.

So, count us in as lucky, on a few occasions along the route we were able to catch glimpses of Denali, but each time I wasn’t quite sure if I was looking at the right thing. “You’ll know when you see it.” was something I kept hearing. When we arrived at the turning around point for our tour we were treated to a pretty great view of the north peak of Denali. Growing up in New Hampshire, and being relatively new to world travel, it’s easy to think of Mount Washington as the grandest thing in all the land. At 6,148′ Mt. Washington is the tallest peak I’ve ever seen or been on.

Well, in the photo below, you’ll see a small portion of the Alaskan mountain range, as we surveyed the view we saw dozens of peaks ranging from 4 to 7,000′. Then towering above it all, we got our glimpse of The Great One, in this photo you can see the north peak blending with the clouds at 19,470′ at about the center of the photo. The south peak at 20,308′ we saw earlier on our bus tour and can faintly be made out in the photo to the left of the north peak. Just incredible!!

If you were to ask me, “What one thing did you find most prominent in Alaska?” I would easily answer, “Good Coffee!!” I believe it must be due to the long winter nights, but the fact is that there is nowhere we went in Alaska where good coffee was hard to find. Honestly, even in the small town of Hope with a population of less than 200, we found Grounds for Hope, and a very good Americano! On our first morning in Denali as Kate slept in the back of our home on wheels, I drove around looking for coffee and came across Henry’s Coffeehouse in Healy. Henry’s is attached to the Earthsong Lodge & Dog Sled where we had the honor of meeting Karin & Jon and hearing their amazing love story and the story of Henry who the coffee shop is named after. We visited Henry’s twice more, parked our home just down the road with a view of the Alaskan range, enjoyed some incredible sunrises over Dora Peak, toured the sled dog kennel, and narrowly missed seeing the northern lights.

There are not as many hiking opportunities in Denali National Park as we were expecting, but the hikes we went on were very enjoyable. Our hike to the Mt. Healy Overlook included meeting and joining several other hikers and continuing on a ridge trail out toward Mt. Healy. Though we didn’t make it to Mt. Healy we had a blast with our new friends, some exciting climbing, amazing views, photos, and dinner plans.

The next two photos are when I decided to cary on the ridge line with two of our new friends to a monolithic peak ahead. The first photo is my view of Kate as we hiked away, the next is Kate’s view of me at the peak.

Finally, my favorite part of the trip!! We had to delay this part of our adventure thanks to restrictions during the President’s visit. During our mid-trip stopover in Anchorage we hooked up with Land & Sea Aviation for a Discovery Flight. Such an amazing experience, the purpose of the discovery flight is to give those interested in the idea of getting their pilot’s license a taste of what flying is like. So unlike a sight seeing flight, I was literally flying the plane including taxiing, take off, navigations, course selection, everything right up until about 45 seconds prior to landing where the instructor took over and put us safely on the ground. We were turned on to this opportunity by Travis, one of our grooms who happens to be in the Air Force, hence our disbelief when he told us that we would be able to actually fly the plane. Kate wasn’t feeling up to taking the controls, so I was lucky enough to have double time as captain and over an hour in the air went by like nothing. We journeyed out over the Turnagain Arm and flew up the valley between 4000′ mountain ranges that is the home of Hope where we visited the day before and could almost make out Grounds for Hope Espresso Bar. While I was flying Kate was busy taking photos of the scenery and a school of Beluga whales below in the Turnagain Arm. During the flight I took a break of serious pilots business to take one of my favorite adventure selfies to date.

We finished our Adventure in Alaska with a hike up Flattop Mountain, an incredibly windy hike, complete with warnings to avoid going up with young children and dogs. We like to try to get some good exercise in prior to a long day of cross country plane travel, and this was a close, convenient and pretty exciting hike to fill the need. Once on top of the mountain it is easy to see how a small dog or kid could be whisked off the mountain, as a grown adult moving and staying upright was very challenging. Sadly, on our way back down we encountered someone who had lost their dog on the mountain the day before and was back looking around the lower areas that day.

If you are heading to Alaska and want to ask for tips or hear about our experience don’t hesitate to reach out to us, we’d love to chat with you about the trip. There is enough adventure in Alaska to last a lifetime, and more photos and excitement than could ever fit in one blog post or even in one trip, so we’ll see you next time Alaska!!