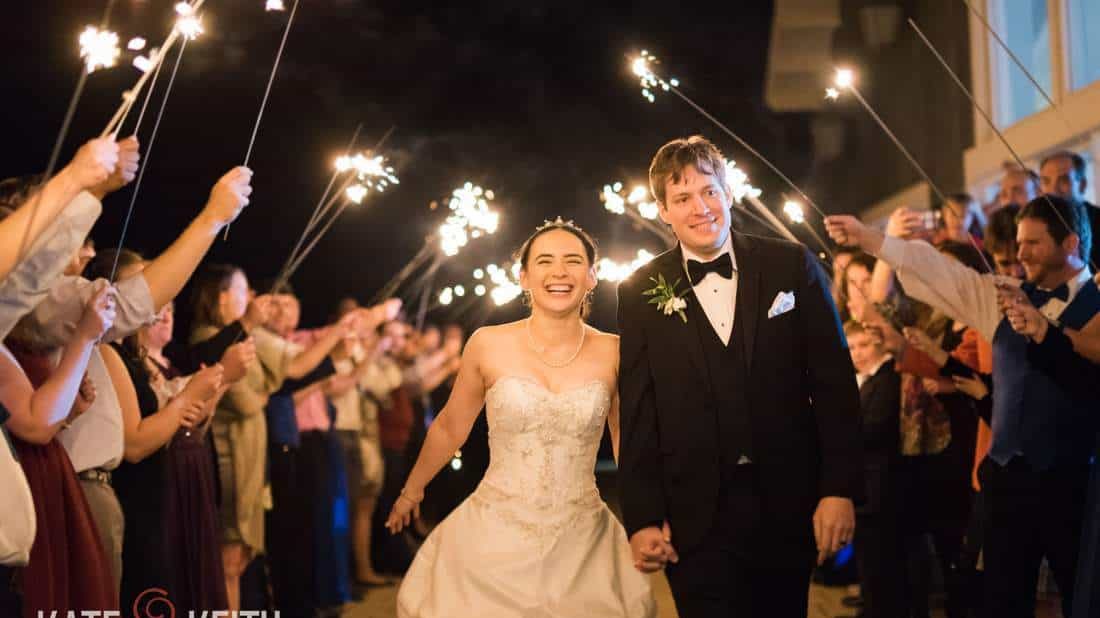 This Pennsylvania Lakeside Wedding was no ordinary wedding. It involved Star Wars, Doctor Who, a huge 20-sided kissing die! Emma and Kevin are self described “massive nerds.” Kevin proposed through a game a few days before their annual December trip to his hometown of Denver. Emma waged war against an army of zombies and slayed an evil necromancer who possessed a powerful artifact. That artifact? A family heirloom engagement ring. Talk about a pretty incredible interactive Christmas gift! Emma then proceeded to become a Wedding Huntress, despite Kevin’s lack of excitement over this newfound game! She entered an evil world filled with internet browser popups, registries, overly eager planners and women mission oriented to make Emma the most dolled up bride on the East Coast.

While many (including Emma and Kevin) view themselves as nerds in love, we saw things a little differently. After a single meeting, we learned about their cat who stalks them from the toilet seat while they shower (and has had a few close calls when the seat wasn’t put down), and watched Emma’s smile grow more contagious with each look at Kevin. Their personalities seemed far from nerdy in our minds, but rather full of unbridled passion, love and adventure.

For their engagement session they wore matching N7 Mass Effect hoodies. Their cats, Chell and Aria are named after video game characters. Wether playing Dungeons and Dragons, Eldritch Horrors, wielding swords, steampunk adventuring, or going hiking Emma and Kevin engage with full enthusiasm and positivity. And we took full advantage, climbing into an abandoned bathtub and scaring wildlife with bows and arrows!

For Emma & Kevin, there are no rain clouds or lemons, only rainbows and lemonade with life enhancing adventures along the way. A lack of understanding means there is an opportunity to learn. With every decision to be made means there is the possibility of loads of creative solutions.

Their passion is deeply rooted in their genes. On the East Coast, Emma’s parents “met and bonded over classical music, daffodils, fresh baked bread and her father’s infamous “weevil” joke.” Out in Colorado, Kevin’s parents met in college and bonded over their “love of cooking, skiing, globetrotting, plotting over home improvements” and long distance calls from their kids. His dad spices up life by answering said phone calls in a Russian accent.

Emma and Kevin aren’t entirely sure how they met. No, they don’t both suffer from selective memory loss. After around a decade of friendship, it just can’t be determined exactly when they first set eyes on one another. However, with relative certainty they can assume it was while attending Gettysburg College in Pennsylvania.

Both in the theater program, Emma was showing Kevin the ropes of stage lighting while up in the catwalk when behind her she her a loud ominous noise. Only to turn around and find Kevin with a light in his hands in more pieces than desired and a wide-eyed Did-I-Do-That look on his face. Emma instantly decided this was a person worth having as a friend.

After graduation Emma stayed nearby for a year until Kevin graduated and they moved together to Bethlehem. No, this is not where the story turns religious. Bethlehem is a decidedly artsy town surrounded by fields in the far outer stretches of the Greater Philadelphia region.

Today, Emma works for a non-profit theater, wearing many hats from actor and stage hand to admin and photographer. Kevin works at a different theater where traveling shows come for short runs of their performance. They keep a tight knit group of gaming friends and adventure boldly from fantasy world to the slightly more human realm.

Their hashtag was #neverwinternuptials and Emma proudly (and with incredible insight) wrote a blog entitled A Girl for a Year: Pre-Wedding Musings of a Postmodern Princess. From the concept of saying “yes” (which in turn means saying “no” to all other potential options), to exploring the world of fake eyelashes, Emma poured her open minded heart into the world of being a “traditional feminine” bride and tackled making her own version. For any bride whose morning wake up routine involves looking in the mirror and affirming “yup, that’s me” before moving on (notice the lack of hair product and makeup dilemmas) then take a read through a few wild months of a girl for a year.

What made it exceptional in our eyes? Emma and Kevin kept true to their personalities. While they did not dress in line with the Society of Creative Anachronism, keeping to the more traditional gown and tux, they infused elements of their passions into every part of the day. From Star Wars to Doctor Who, there was no shortage of references and even a 20-sided die made it’s way into the reception program. (Rolling a 4-6 meant the photographers had to kiss – YES!)

They also never lost sight of the underlying meaning of it all. At the end of the day, their being married and having friends & family together was what mattered most. And despite temperamental rain and cold winds, their Pennsylvania lakeside wedding goals were splendidly achieved!

To us, they are an inspiration. Ones who are completely fine (and happy) to admit, “yup, we’re a bit offbeat.” Wildly enthusiastic to express their passions, they don’t make those who have never heard of N7 feel awkward, and bring gluten free vegan treats for the girl with all sorts of food restrictions to enjoy (just because.) We have been moved by their excitement for exploring new things, maintaining optimism, and sharing their hearts so completely with us. It’s been a true privilege to know such selfless people. Thank you for pushing us into different zones of photographic exploration and exposing your infectious energy!