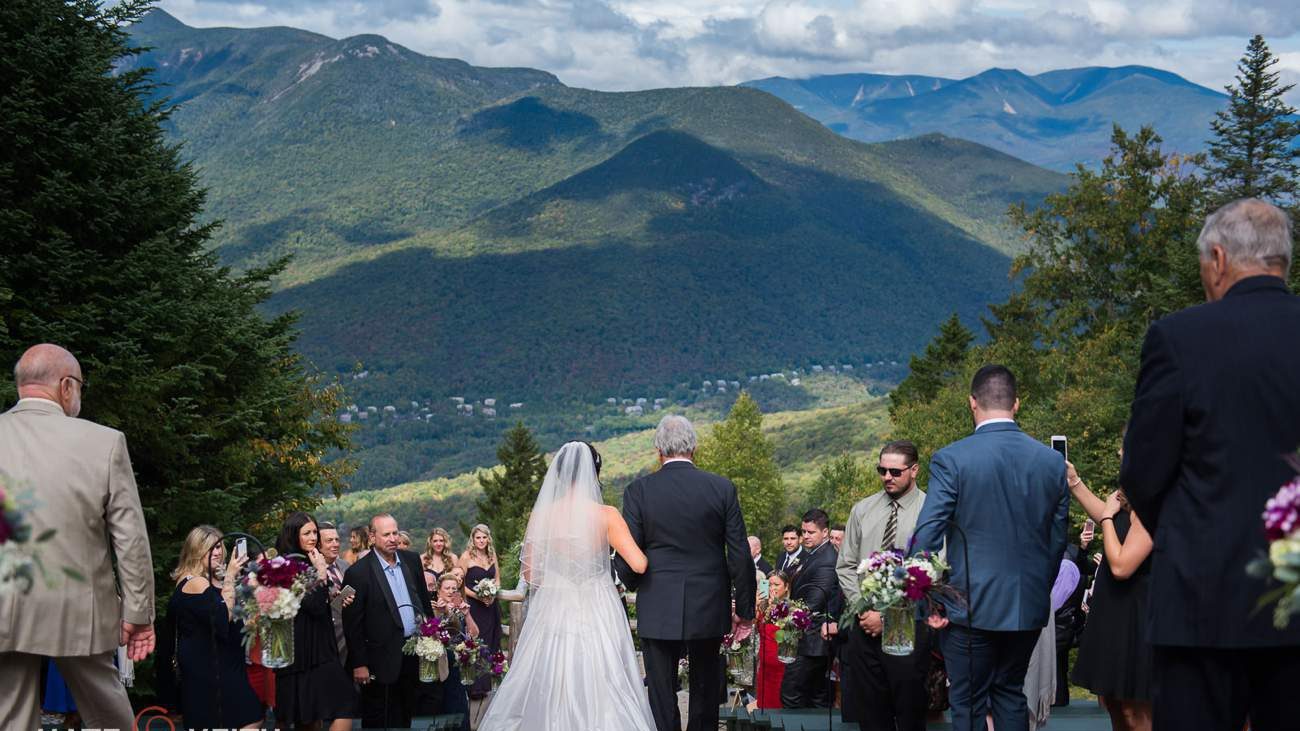 Kaitlin & Michael have a streak of adventure and competition in them. When Kait let us know that she was goal setting for Kate & Keith’s best photo of the year, we took her seriously. A Loon Mountain wedding is a fantastic starting point for awesomeness to follow. So we set out with Kait & Mike on a mission to create something epic as their Loon Mountain Wedding Photographers. With these two, that was easy!

The couple met four and a half years ago online. They were one another’s first online dating experience. But that was not enough to get in their way. While Kait refused to meet Mike solo, her bringing friends along didn’t deter him. Neither did their teasing and interviewing. It wasn’t long before Mike passed initiation and they had a one-on-one private date.

Their first impressions were basically carbon copies. Mike was wowed by how beautiful she was. Kaitlin instantly thought “he’s cute!” Mike found Kait to be one of the most caring and sweet women he’d met. She though there must be a catch since he seemed so kind.

Two months later, Kait was initiated by Mike’s friends at Camp Cod. Every 4th of July, friends met on Cape Cod for an adult summer camp of sorts. No typical beach experience, the initiation involves writing poems in addition to water activities. You’re either in or you’re not. Kait passed with ease.

Family and friends are something they each value with high priority. Having each gained approval in their respective friend’s circles, Kait and Mike were now inseparable. On weekends they go for lots of drives around New England. Mike loves the winter, Kait summer. They motivate one another through the seasons. Hiking, zip lining, trips to Maine. And plenty of snuggle time with their hound mix, Daisy. Mike knew Kait was getting a ring from him. He had it all planned out when Kait said, “wouldn’t it be fun to get engaged at Camp Cod?” She said it so casually, she likely forgot soon after. However Mike never will as his plans to propose took a sharp turn with a responsive delay until their summer camp time.

During their fourth summer at Camp Cod, the moment arrived. Mike took Kait out for oceanfront dining. After, he led her down a path to the beach. Hiding a ring in his pocket, Kait couldn’t understand why he wasn’t taking her hand on that side. Reflecting on their time at Camp Code Mike said, “You know what would make it even better?” Down on one knee now, “Is if you would marry me.” And as the sun set on their private section of beach their best adventure began. (Too corny? We think it’s perfect!)

The White Mountains are a huge part of their relationship. While Kaitlin travels for her pharmaceutical job, Sundays are their time to venture north from Boston and get back to their roots. The Flume is of such value to them that in lieu of wedding favors they made a donation to the park.

So a White Mountain wedding was a given. Having a place where family and friends could relax and enjoy the celebration equally important. Loon Mountain Resort gave them both. Plus a stunning mountaintop ceremony location.

Kaitlin & Mike value the little things in life. They get excited over vacuum cleaners and coffee makers. Feel giddy when out with mittens and wool hats with no one else around. Mike gets freaked out by crabs on the beach. Kait has a cute wrinkle in her nose when laughing. They support one another with compassion and strength. And they definitely have no shortage of smiles.

We can’t imagine either of them being stressed out. Or anything less than smiles. Wedding day was certainly no exception. Rain from the night before vanished, leaving the mountain bathed in warm sun. It almost seemed surreal as other parts of the country battled rain and storms.

Kait’s salon appointment fell through last minute. Miraculously, another option opened at Daydreams in Lincoln. No stress. Hurricanes threatened to cancel their honeymoon flight to Saint Lucia. No worries.

On wedding day, it was all about being with their loved ones. Nothing could intrude on their happiness. With no first look, it was an emotional sight for Mike seeing Kaitlin walk down the aisle. And we’re pretty sure he’ll never live it down. But we’re also sure of how unbelievably devoted to her he is.

The rest of the day unfolded with complete ease. We stole away down to the river for a quite moment. Then danced away the night with music DJ’ed by Mike’s high school friend. If their cheeks weren’t sore by the next day, we’d be surprised. The dance floor was packed all night, led by the happy couple. They could likely make a successful side business hiring themselves out as wedding dance initiators.

And, yes, they made it to their honeymoon.

Are you looking for Loon Mountain wedding photographers? Or are you planning another equally awesome wedding? We’d love to chat with you and learn more about your wedding plans. Here’s where you can contact us!!