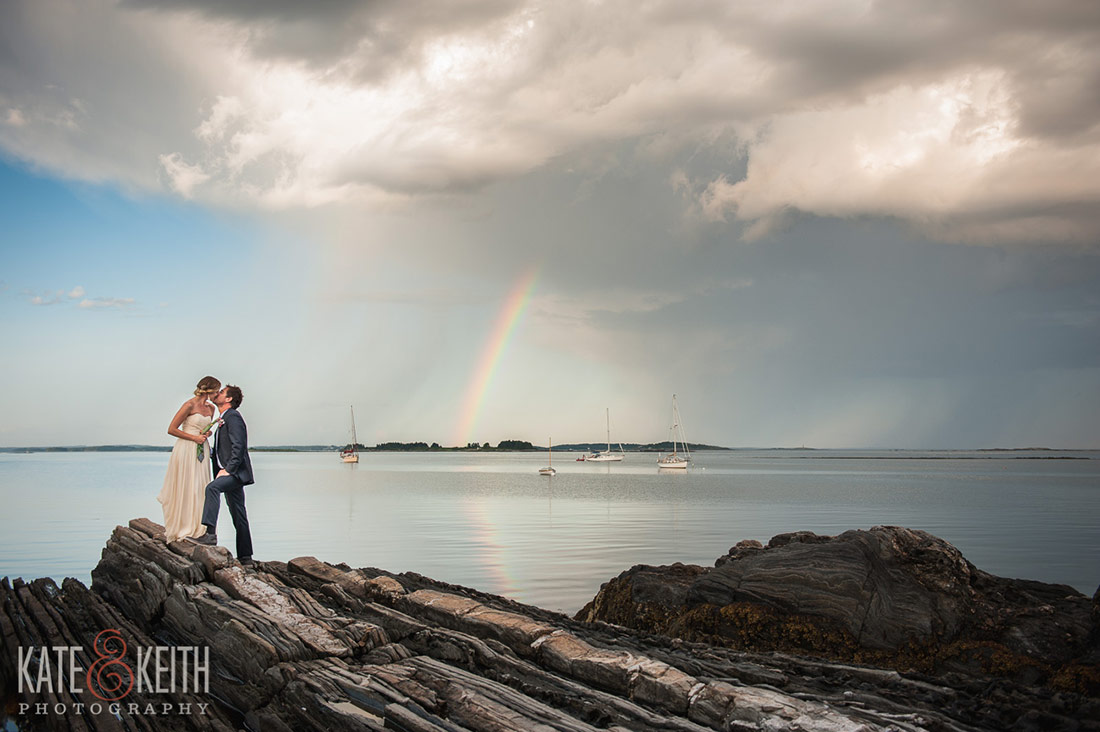 This Cliff Island wedding has all the makings of a modern day fairytale. Cliff Island is one of thousands of islands off Maine’s coast, so it’s no wonder we almost boarded the wrong water taxi! Loie had arranged for our ride to the island on a water taxi from the main land. We felt a bit like tourists enjoying the ride out of Portland and the views of Casco Bay as we enjoyed the life of Maine wedding photographers.

We arrived after a wonderful private boat ride to find Loie tucked away on the top floor of an old New Englander right near the docks. She was like a princess awaiting rescue in the tower of her castle (too romanticized? well, you wouldn’t have thought so if you’d been there!)

Ben’s sister, Jen won sister-in-law-to-be of the year award as she perfected every hair on Loie while the skies opened up and brought a totally unexpected storm. After six years together, Ben & Loie weren’t phased.

They met at a mutual friend’s wedding in Maine and until recently lived in NYC together. Their new home is Boulder, CO. where Loie is working on a masters in Creative Writing at University of Boulder and Ben travels the world as a bass player (check out his site and her site!) Though their spirits are adventurous, they still value local, finding a CO. jeweler to custom make their rings, collecting flowers from their friend’s Cliff Island yard, and eliciting help from every family member to make the day as heartfelt as possible. And despite Loie’s sophisticated beauty, this island girl opted for bare feet!

Loie originally wanted to be bold with a red wedding dress. Ben wasn’t sharing the vision. We loved her alternative. Her dress is from J. Crew. But it’s not a bridal gown, it’s a bridesmaid’s dress. The difference? Cream versus pure white and many hundreds of dollars. That’s it! And to give it a bit more charm Loie tracked down vintage 1940’s buttons on Etsy from a local vendor and made the gown her own.

Ben & Loie are one of the calmest couples we have met and instead of being upset over massive rain they took it all in stride. No problem! We can just move the location and get married right here as soon as the rain stops!

So the lawn was organized and the makeshift ceremony between the Cliff Island native and her North Carolina man happened, with his uncle officiating!

PS If you recognize Ben, it’s probably because he’s been gracing NBC weekly on America’s Got Talent as the bass player for contestant Jonah Smith! In fact, he was back at Radio City Music Hall right after the wedding!

Loie’s sweet brothers each had a role for the day. William ushered guests from the boat landing while Charlie took the day off from his chef duties at Mache Bistro in Bar Harbor to create an unbelievable lobster bake.

They had almost too much fun playing with their lobster and nearly risked staining Ben’s tie (this was about the only thing he showed anxiety over, and all we know is that it was an “expensive” tie!)

With every rain there is a rainbow, and we were lucky enough to find it!

Sadly, because the rain caused a great delay in the day, we weren’t able to stay for the entire dinner as there was a ferry to catch.

We raced to catch the boat, and as the sun set and moon rose over the islands of Casco Bay, we thought of the amazing evening Ben & Loie were enjoying with their families. Being the only vendors there, we were especially blessed to have been a part of something so intimate.

Are you looking for a Maine Wedding photographer for your Cliff Island wedding? We definitely want to talk to you!