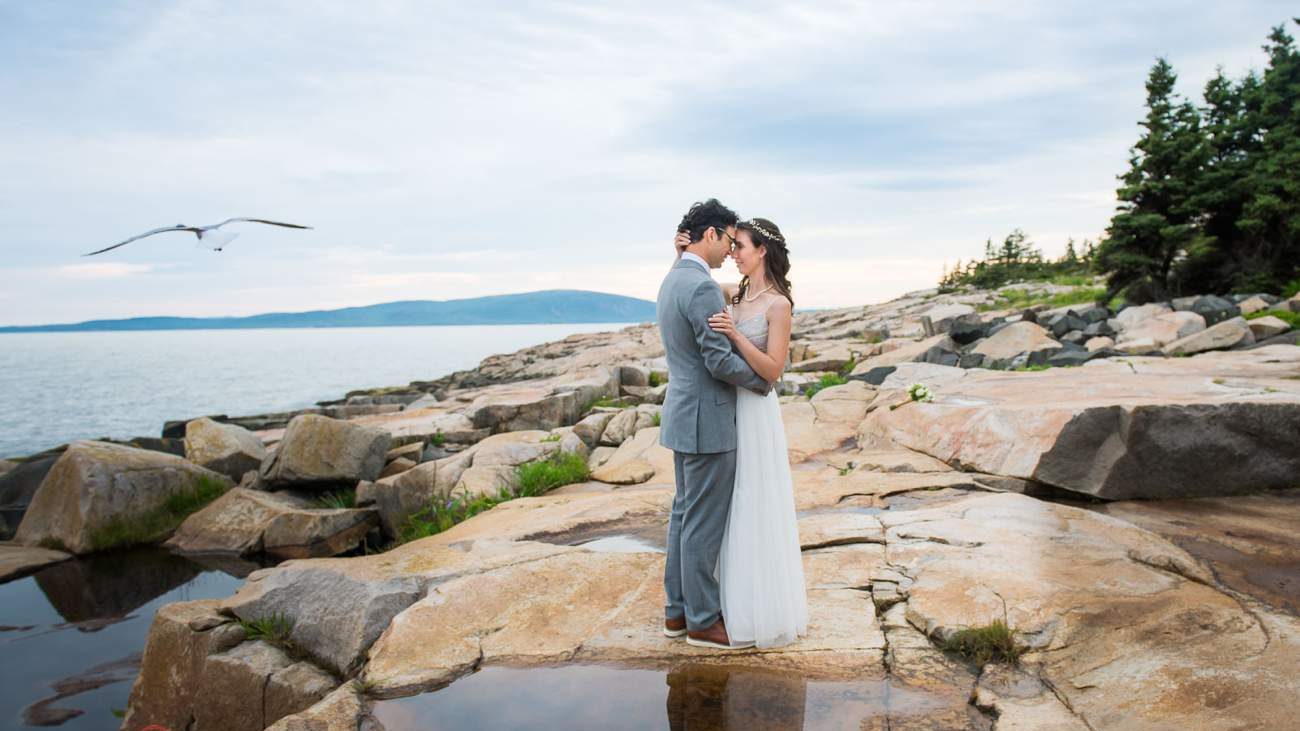 Erin & Miguel’s life stories read like world class resumes. Although for both, it’s hard to tell whether they are renowned scientists or elite outdoors athletes. They’re both! And their Acadia National Park wedding was the perfect setting to capture their diversity.

Erin & Miguel both attended Bowdoin College in Maine, studying neuroscience. Bowdoin is a relatively small college, so they had seen one another around. It wasn’t until their neuromolecular biology spring break trip that they really connected.

Okay, so not a normal college Spring Break option, but obviously still with some perks. First being that it was in Acadia National Park. On the rocks flanking Sand Beach, the two began talking. Most visitors stick to the sand enjoying the waves and taking in the scenery. It’s the adventurous that gravitate towards the outer cliffs and climb along the scraggly rocks. This was an obvious indicator that these two had more in common than neurons.

Erin grew up on Long Island in New York. She lived in the city for a bit, but found it overwhelming. Her happy place is in the mountains and among the trees. She was the head academic mentor for the Bowdoin Center for Learning. Then taught Chemistry, Biology and English at the high school level for kids with learning disabilities. After that she completed a Masters in Special Education in Boston. Add that to her work in a neuropsychological orphanage in Russia. And it’s seemingly fit that she is on her way to being a pediatric neurologist.

Miguel’s family is in Boulder, so it’s no wonder where his love of the outdoors stems from. Although his family is not very outdoorsy. Originally from Mexico, his love for the winter is curious. He took two years off before med school to ski before hitting the grindstone. And then worked at Cannon Mountain near their med school.

Erin just finished her 3rd year of med school with an undeclared focus. Miguel, while a few years behind has a vision of specializing in wilderness emergency medicine. They apparently don’t sleep.

Together they climb, ski, hike and explore. The outdoors cemented their relationship. They treat one another as equals in every way and have a mutual love of exploration. So having their ceremony in Acadia National Park seemed perfect. Left up to their own devices, it would have been while hanging off the side of a cliff. However, being kind to family members, they settled for the rocky oceanfront with a Schoodic Peninsula wedding ceremony.

Having grown up in Mexico, the tradition is to be married in a church. However it wouldn’t have seemed authentic to Miguel. And after getting to know these two, we couldn’t have imagined it any other way.

They work extremely hard. All of our Skype calls and chats took place from different areas of their hospital. And in their free time they flock to the mountains.

The plan was to meet at sunrise for a pre-wedding photo shoot. We would harness up and go climbing in full wedding attire and unleash their adventurous spirits on Otter Cliffs in Acadia National Park. Miguel’s elbow had other plans. A few weeks before he dislocated it while mountain biking. Erin had already figured out how to strap a harness around a wedding dress (by cutting a hole in a thrift store version.)

Plan B, they hiked up the Beehive in their auxiliary wedding outfits, to kick off their Acadia National Park Wedding. A close second to rock climbing at Otter Cliffs. The fog covered the coastline completely hiding the sunrise, but it was still epic! We finished back at the parking lot with plenty of time for a quick nap before getting wedding ready.

The wedding began in Bar Harbor at the docks. The fog had turned into a rain and the rented boat was running late, not yet returned from their previous trip. Despite the delay, spirits remained high and by the time we launched the rain had subsided. The waves however had not, and the boat needed to take a longer route to avoid the rough seas. Yet still, everyone was cheerful and enjoying the fresh air. Our captain was entertaining and informative, and bride & groom glowing.

A taxi van was scheduled to pick us up from the Schoodic dock and drive us to the point for the ceremony. Upon arrival, there was no sign. And no cell service. However, across the lot was an Island Explorer bus. A free service transporting tourists through the national park on a scheduled route.

Seemingly out of options, the bus driver was implored upon to save the day. She called dispatch, received the okay, and came to our rescue. The propane powered bus took the entire wedding to the ceremony location, waited, and returned us to the boat.

Seagulls watched on, and Erin & Miguel were finally married. However, the return back to Bar Harbor was significantly delayed from all the hiccups. By the time everyone got to the Asticou Inn for dinner, the kitchen was about to close. Once again the day was saved as staff stayed on to end the day with perfection.

Erin & Miguel never seemed phased for a moment. Maybe because their work lives are constantly deviating from plan. Or possibly because they are super laid back. Either way, the end result was amazing.

A honeymoon mountain biking in the Swiss Alps capped off their celebration. Now it’s back to the grind, and an incredibly amazing future! We can’t wait to see what’s around the corner for them. And to have some more mountain top encounters!

Are you looking for Acadia National Park wedding photographers? Or are you planning another equally awesome wedding? We’d love to chat with you and learn more about your wedding plans. Here’s where you can contact us!!